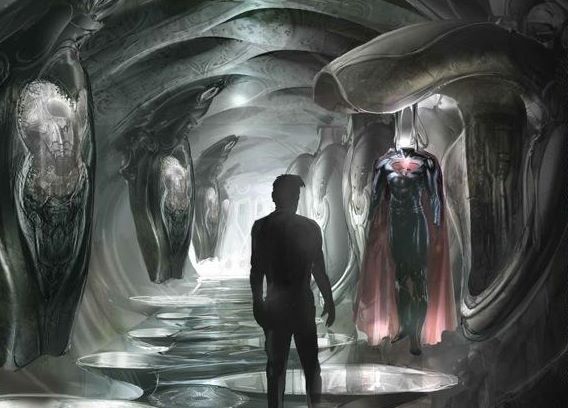 As the rubble, dust and shredded skyscraper metal from the destruction of Metropolis finally begins to the settle, the reactions of fans and critics alike towards Zack Snyder’s Superman reboot, Man of Steel, have situated the action-packed blockbuster as one of the most divisive and controversial examples of mainstream summer cinema of possibly all time. With opinions collated it would seem that contention runs throughout all who purchased a ticket, whether that be die-hard DC comic readers, a casual cinemagoer seeking thrills on a Saturday night or one of those hardened film critics well aware of what constitutes ‘rotten’ or ‘fresh’.

Irrespective of whether or not you approved of that ending, that romance or that everything but the kitchen sink mentality Snyder employed throughout, but especially within the final third of the film, it’s hard to argue with the sheer amount of work which went into making Man of Steel a visual feast for the geekiest to most critical of eyes. Titan books’ lovingly crafted ‘Man of Steel: Inside the Legendary World of Superman’ is a formidable and attractive addition to The Man of Steel canon that rivals Lois Lane in the essential companion stakes; displaying the intensive behind the camera processes of both cast and crew, that any true Superman fan won’t want to miss out on.

At first glance, the high production value of the hardcover document of the film’s pre and post-production literally jumps off the page. From a simplistic textured cover embossed with the unmistakable ‘S’ symbol of House El to the distinctive smell of the silver ink which adorns the pages throughout, all questions of a cynical moneymaking movie tie-in are immediately dismissed and the price tag justified. Between the covers the content continues to shine both informatively and stylistically. Page upon page of sumptuous concept art will more than please most graphic novel fans whilst also displaying how successfully Snyder translated fantastical page to screen.For those more concerned with film-making aspects, chapters such as ‘Superman vérité’ focus upon cinematography and camerawork detailing how those beautiful flashback sequences of young Kal-El were achieved with such emotive grace and restraint, whilst info on casting, and set and costume design (especially in the case of Zod’s truly menacing insurgents) is present in troves. We even get info on how the man who is widely considered the best Superman yet, Henry Cavill, achieved his impressive physique via arduous workouts, a lesson in the Kryptonian language and a rich history of the dead planet’s iconography and bloodlines. Essentially, the book can be as deep as you want to make it, working as both a quick fix for those in need of stunning artwork or an under the microscope look at how Supes’ new lore was fleshed out.

Man of Steel taught us that following the finest superhero flick of all time is a hard act to follow, especially when you’re most likely creating a jumping off point for a mega franchise such as The Justice League of America, but hopefully ‘Inside The Legendary World of Superman’ will give those less convinced a newfound appreciation of the dark and engrossing mythology Snyder & Co. crafted from the ground up to the stars, whilst providing a perfect bridge between Cavill’s outings for those who can’t get enough of the red, yellow and blue.