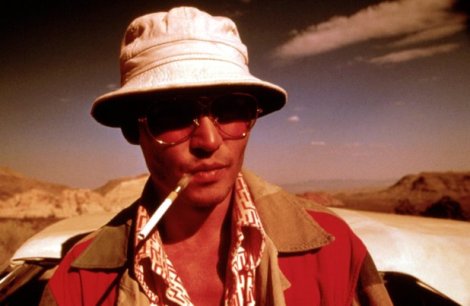 Accompanying this week’s theatrical release of Terry Gilliam’s The Zero Theorem, we take a deeper look at what delights the Netflix coffers have to offer from the seminal auteur. You have plenty to pick from; there’s the timeless Monty Python and the Holy Grail, the diabolical The Brothers Grimm or the surreal and hilarious The Adventures of Baron Munchausen. However, the clear choice to limber yourself up for the Captain of Chaos’ latest big screen offering is a film that delves into the drug induced legend of Hunter S. Thompson’s monolith for the chemically dependent, Fear and Loathing in Las Vegas.

Based on Thompson’s roman à clef of the same name, Fear and Loathing in Las Vegas follows gonzo journalist Raoul Duke (Johnny Depp) and his bloated ‘Samoan’ legal advisor Dr. Gonzo (Benicio Del Toro) upon their trip to find the heart of the American dream. Armed with a suitcase of medicinal tricks that would dwarf a country’s worth of pharmacy stockrooms, Duke and Gonzo storm head first through Gilliam’s psychotic, vomit inducing version of Las Vegas.

Fear and Loathing is uneven at best, oscillating wildly between nightmarish voyeurism and psychedelic slap stick – by no means is it a complete film. Badly dubbed in places and a victim of some painful continuity errors (but then again with the chaotic subject matter this could very be a cinematic device used by Gilliam to extenuate the narrative), yet, similarly to all of Gilliam’s films the picture is a sensory buzz, a visual spectacular that seems limited by only dullish box you’ll be watching it on.

Furthermore Fear and Loathing is a shining example of why Johnny Depp is one of the greatest actors of our generation, consummately emulating Thompson’s gurning, jaded, sometimes cartoonish persona. For an alternative take on the father of social commentary and self-parody check out Bill Murray’s stab at the Thompson lore in Where the Buffalo Roam (also available on Netflix UK), and for the die-hard fans, seek out Depp’s second take on Thompson in The Rum Diary.

Fear and Loathing in Las Vegas is available on Netflix UK now.