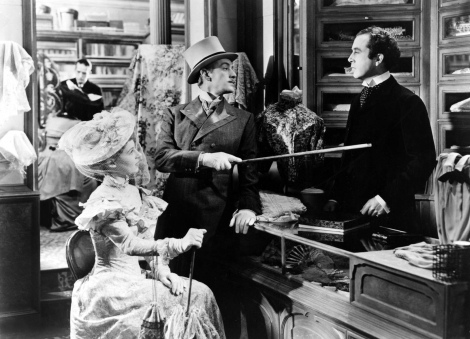 Over half-a-century later from their initial cinematic release, the pictures contained in Volume One of Ealing studios’ Blu-ray collection stand as shining examples of the illustrious English studio’s post-war comedy output. Including three comedic follies, this Blu-ray compilation offers the perfect opportunity for life-long fans to become reacquainted, and newcomers to be introduced to Ealing’s attractively restored back-catalogue.

The first and most notable picture of the set is 1949’s Kind Hearts and Coronets.Though widely considered one of the greatest comedies ever made, the picture is a cruel and sombre affair, immersed in death, heartbreak, and the woes of early 20th century class division. Dennis Price stars as murderous protagonist, Louis, an ostracised member of the D’Ascoyne family, who, after being repeatedly wronged by the blue-blooded collective, decides to murder his way to the top of their family tree. Alongside Price the revered Alec Guinness features in eight different roles as the unsuspecting members of the D’Ascoyne family; an accomplished turn, which placed in a lesser actor’s hands, could have easily proven an overbearing distraction to the plot’s bleak elegance.

Though they may not carry the same lofty and ultimately deserved reputation as Kind Hearts and Coronets, the remaining titles in the collection, crime caper The Lavender Hill Mob, and The Man in the White Suit, with its forward thinking mesh of drama and science-fiction, possess much of the same ingenious charm and loveable interactions between their farcical characters.

Laced with classical storytelling – much of which challenged popular conventions of the time – and devious and enthralling performances, This Ealing collection is a deeply loveable and revealing snapshot of the studios’ celebrated productions. Intricately restored to the highest of standards and bearing a veritable goldmine of bonus features, including star-studded introductions, audio commentaries, and critical breakdowns of the films, Volume One of this Blu-ray collection is an essential piece of English cinematic heritage that deserves to be visited over and over again.

The Ealing Studios Collection: Volume One is available on DVD and Blu-ray from March 31st courtesy of StudioCanal. Pre-order your copy here.