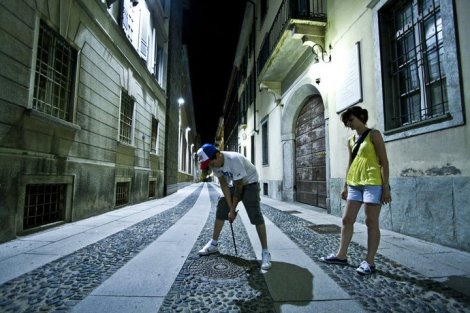 Montreal based writer & director Caroline Bacle’s 2012 documentary Lost Rivers interweaves the stories of rivers buried beneath major cities around the world. Each story from London, Seoul, Yonkers, to Toronto, Montreal and Brescia, sheds light on the forgotten and suppressed eco-systems idly flowing beneath these concrete jungles. Weighing the huge potential, and actual, socio-economic and environmental benefits these rivers can have when embraced into urban environments.

The film begins observing a group of ‘drainers’ working out of Montreal. These self-proclaimed interest groups, one of many round the world, mission themselves to explore and map these vast subterranean water ways. Using photography, exhibitions and art installations – In the Brescia branch tourist expeditions – to raise public awareness to a previously undocumented world.

Inevitably with a feature discussing themes of nature and preservation, the history lesson soon comes into play. Detailing the fallout of the industrial revolution in London, pollution, disease and its attribution to waste in the natural streams and estuaries (which had borne industrialisation), leading to the birth of man-made sewage systems. The subsequent stories however – the renovation of the Cheonggyecheon River in Seoul and the Saw Mill tributary in Yonkers, New York – is where Bacle finds a genuine heart and narrative, showing reconnection, not only with lost rivers but a lost nature; lost to the ignorant charge of industry and found under pluralistic progression of modern industry.

Lost Rivers does not feel like other ecological documentaries – which I believe work like idioms concerning beauty: simple and guilt inducing – Bacle focuses on multiple, complex yet engaging narratives competently. In addition, instead of pandering to blindly bashing industrialisation and the negatives of expansion, Bacle is polemic but with concession, and celebrates progressive individuals who work to marry the ersatz and natural.