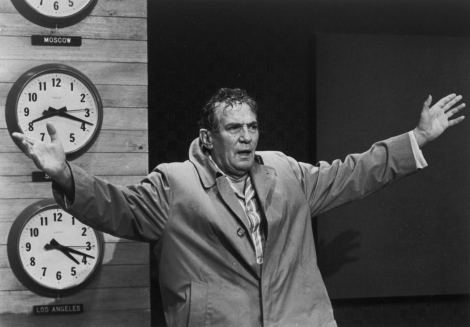 Recently released is the first of four films left by Philip Seymour Hoffman following his unexpected death in February earlier this year. Before we see him star in the final two installments of the Hunger Games, and in John Slattery’s God’s Pocket, we can witness him do what he did best; steal every scene as German sleuth Gunther Bachmann in Anton Corbijn’s adaptation of John Le Carre’s chillingly contemporary spy thriller, A Most Wanted Man.

Cinema, like all art, is a form of immortality. The fear with films of this nature is whether the wounds are visible, lingering as a haunting reminder. But A Most Wanted Man, like this week’s NFOTW, resounds as a fitting tribute and a lasting celebration to its star taken too early.

Although technically not a posthumous film, as Peter Finch died a short time after the film’s release, but I believe still a worthy candidate as he is still the only man to ever win the Best Actor Oscar posthumously for his performance as Howard Beale, a man very much acting as the disillusioned dough in the kneading knuckles of national news in 1976’s Network.

After sitting in the anchor’s chair for over ten years, Beale is forced into early retirement due to his dismal ratings and a sensationalist seeking populace. But instead of a genial goodbye, Beale slaps down a savage tirade, criticizing everyone from the hegemonic powers forcing him out, to the TV dinner crowd bored with his banality. Proving a ratings hit, as unstable middle-aged men on the brink of sanity prophesying do, Beale is asked to do his thing – think Peter Griffin’s ‘Grinds my Gears’ meeting the brutality of Malcolm Tucker’s ‘non-stopping bollock shop’, delivered with of the eloquence and grandeur of an Shakespearean sonnet – five nights a week, by ambitious and ruthless telly exec Diane Christensen (Faye Dunaway) – whose pitching sessions make Alan Partridge’s Monkey Tennis seem like Downton Abbey in comparison.

Paddy Chayevsky sharp writing evolves into this absolutely fearless satire that hardly shoots for the peripherals, but rather grips like a steel vice – silkily and intelligently speaking its agenda to offset the shrill pseudo-intellectual circumlocution thumped out through the 1970’s. Network is one for the film fans, and like A Most Wanted Man a wonderful goodbye to an amazing actor.