It might not officially be The 12 Days of Christmas, but FILM IN WORDS will still fill your festive viewing schedule with cheer. From beloved movies that have become an irreplaceable holiday tradition to cult and lesser known Xmas cuts that promise to subvert and haunt your holidays, there’s something for everyone all the way up to Christmas Eve. Day five proves that it even buddy cop action flicks can make time for Christmas. 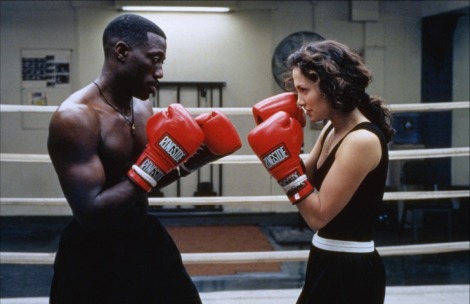 NEXT STOP: CHRISTMAS & CRIME IN NYC

Not content with quashing racial stereotypes in 1992’s White Men Can’t Jump – turns out they can –Wesley and Woody returned three years later to prove that the dynamic between brothers from another mother could make for one helluva action packed heist movie. Transit cops and adoptive brothers, John (Wesley Snipes) and Charlie (Woody Harrelson) are hard at work beneath the bustling streets of NYC during Christmas time. A hectic encounter with a young small-time mugger results in the brothers nearly being mowed down by the Money Train, a high-speed multi-carriage Juggernaut responsible for transporting the subway system’s hefty profits, and the teenage crook being gunned down by the train’s heavily armed guards.

Angry and disillusioned at the dressing down they receive from transit boss with a Napoleon complex, Donald Patterson, and his lack of sympathy for the bullet-ridden teen, Charlie tentatively hints that the Money Train, may not be as secure as the hulking mass of silver steel’s appearance may suggest. A series a hefty gambling debts further convince the runt of the sibling litter to entertain his idea of a New Year’s Eve heist – with or without his brother…

The casting is undoubtedly Money Train‘s strongest attribute. They rapport Harrelson and Snipes established as ballin’ buddies remains – creating both comedy and tension as the brothers fight crime, one another, and for the affection of new recruit to their team, Officer Grace Santiago (Jennifer Lopez). Despite playing a pivotal role in some shockingly bad cinematic lows, case in present, Gigli, Jennifer Lopez also boasts her fair share of high spots. Most have seen her adopt the role of a strong-minded female protagonist in a position of power. From Soderbergh’s flashy crime caper, Out of Sight, to the visually stunning psychological thriller, The Cell, Lopez does possess many endearing traits and when allowed to be strong, both physically and mentally, as well as beautiful, she possesses a fiery potency that can hold its own amongst the overt masculinity of 90’s action.

With full disclosure in mind, Money Train bombed in cinemas upon release, it currently carries a rating of 22% on Rotten Tomatoes, and it has very few vocal proponents – but it’s difficult to understand why such negativity is present. While the setting of New York during December is widely utilised, the descent the picture takes down into the city’s chugging underbelly still feels fresh and dynamic. The pacing of the movie’s contrasting sequences, from rapid action to festive periods of barroom downtime, is another aspect which is difficult to fault. Perhaps during an era when action was at both its finest and most prominent, moviegoer and critical fatigue afflicted Money Train. Perhaps in 1995 Money Train was a bad movie. But today, after nearly another two decades of tepid action cinema desperate to recapture the former glories of the eighties and nineties, the film is dynamic and surprisingly thoughtful entry into the genre that is more than deserving of a return journey this Christmas time.