Martin Brest’s Midnight Run is the kind of movie you discover while idly flicking through your television’s countless channels in the middle of the night. It’s the kind of movie that even if you stumble across its cross-country antics at the halfway point, you still stick around for the action and backtrack at a later date. Midnight Run is a cult movie, and not due to a ground-breaking visual style or a confrontational thematic focus, but simply because it’s incredibly loveable.

Robert De Niro stars as Jack Walsh, a bounty hunter whose latest assignment could set him up for life with a one hundred thousand dollar payday. His target, Jonathan “The Duke” Mardukas (Charles Grodin), a mob accountant famed for embezzling $15 million from his former employers and donating a massive chunk of the money to charity. With the mob, the FBI, and a fellow bounty hunter, all hunting for Mardukas, Jack’s goal of dragging his score back to Los Angeles from New York, and his retirement fund, grow more and more distant by the hour.

At its core, and as with many of the 1980’s most successful and enduring mainstream pictures, Midnight Run, is a buddy movie. De Niro and Grodin are a classic odd-couple; one, a sarcastic and weary ex-cop, the other, a quick-witted accountant who found himself in the wrong place at the wrong time. Yet, as the two traverse a murky underworld built upon a foundation of big money bail bonds and mob boss scorn, it’s their interactions with one-another which propel Midnight Run’s familiar setup into unmissable territory. As with Brest’s perhaps most recognisable directorial credit, Beverly Hills Cop, action and comedy are harmoniously balanced throughout, and yet a real sense of menace is retained due to characters such as Dennis Farina’s ruthless Vegas crimelord, Jimmy Serrano, and the gun-toting set pieces which pepper the landscape with shotgun pellets and automatic rifle bullets.

Despite, its many strengths, from the grin inducing dialogue to Danny Elfman’s wonderfully eclectic score, Midnight Run’s greatest strength is its personality loaded cast. Not one role is wasted, and with every character equipped with a wealth of quirks, mannerisms and mood swings there’s ultimately never a dull moment. While Grodin is an endearing one-half of a leading partnership, De Niro is at his finest, jumping from fast-talking star to moody anti-hero on the drop of a dime, and though this will never rank as his most accomplished performance, it is perhaps his most instantly watchable.

Nearly thirty years old and still a joyous powerhouse of a road trip movie, Midnight Run is more than deserving of high-definition Blu-ray release. It’s a shame that the bonus features included consist primarily of interviews and don’t display more diversity, but nevertheless, discussions with cast and crew are genuinely insightful and uplifting. Midnight Run has got its fair share of planes, trains and automobiles, but it also has countless other memorable reasons to take this classic 80’s journey all over again. 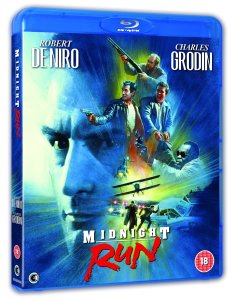