Over the next few weeks, FILM IN WORDS will be taking a special look at the 2015 UK Green film festival, showcasing and reviewing this year’s stellar lineup of thematically potent, visually arresting and environmentally focused films. We hope you can come along for the ride… 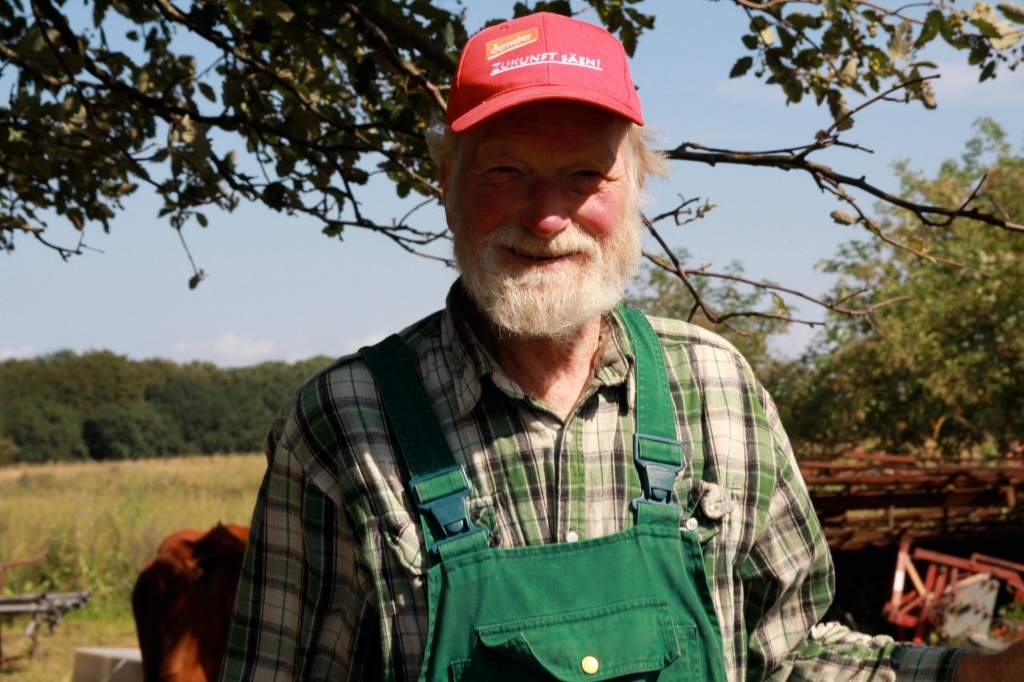 EARTHWORMS IN THE GROUND, ROOKS IN THE TREES

“Dear sun, dear earth, we are grateful for what it’s worth. Bless this food.” Niels Stockholm

In 1978 graduate engineer Niels Stokholm decided to relinquish his role as Head of Research at the Technical University of Denmark and elected to build Thorshøjgaard, a biodynamic farm that’s primary goal was to preserve Denmark’s Danish Red Breed Cattle. Today, Niels is an octogenarian and still runs the farm alongside his wife Rita. His unique agricultural methods have led to his foodstuffs being considered as some of the finest Denmark’s green and pleasant land has to offer, and Niels supplies revered Michelin star restaurants such as NOMA and Restaurant Julian with precious raw ingredients.

However, Thorshøjgaard is seemingly in a constant state of peril as Niels’ atypical, biodynamic approach to farming repeatedly draws the ire of inspectors, who refuse to grant him “organic” certification due to his animal welfare standards and also aggressively cut his funding – despite his clear and absolute respect for the livestock inhabiting his land. In this case the documentary essentially becomes evidence, reaffirming that while Niels’ approach may not conform, whether his or a European Union stamped approach is best for the animals is still up for debate. Something must be done to secure the future of the farm and its diverse methods, and Niels can’t do it alone.

Within the first sequence of the picture, the farm’s tranquil atmosphere is ripped away as Niels and Rita must help birth a breech bull calf. The calf’s mother unleashes several bloodcurdling howls – discordant horrors many may have believed cattle were incapable of producing. Niels attaches rope to the calf’s protruding legs and begins to pull before enlisting further force in the shape of All Good Things‘ director, Phie Ambo. Suddenly the calf is free and balance is restored to the serene idyll, and yet, in that short alarming passage, the farms purpose is made evident to the viewer, the vast struggles and rewards laid out, gasping for air on a bed of hay.

Ambo’s naturalistic approach to capturing the many wonders of the farm’s beautiful sights and sounds is tirelessly patient. Not a single element in frame feels forced or coerced into being. A nightingale’s playful song; the afternoon’s shadows dancing in the wind; the silhouette of vegetation against a pale purple sunset – Ambo takes an evocative widescreen approach to detailing a distinctly personal story. Her contemplative visual style elevates the documentary to something highly distinct and often profoundly beautiful

In Thorshøjgaard, Niels will tell you that spiritual forces are at work. He will eloquently articulate how the cosmos’ influence rests in the dirt below, and how the sun softly speaks to dandelions. The constructs and subject matter of Ambo’s time spent with Niels and Rita are often unflinching and meditative. To many, Niels’ beliefs may prove controversial or perhaps too obtuse to stomach. Nevertheless, his passion is infectious, encouraging the debate circling his methods of husbandry, while the sense of otherworldliness that has clearly gripped Niels is so strong it permeates the screen. Roadblocks of red tape and the solutions of those inspired by the farm constantly arise and dissipate throughout, but the dedication Niels displays and the discussions regarding sustainability, agriculture, animal welfare, and broader environmental issues he raises are truly important. Ambo has shaped these talking points into a significant and lyrical piece of cinema overflowing with life-giving organisms and the finest visual produce.