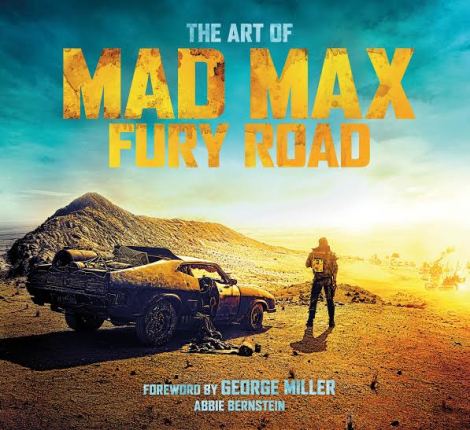 The ferocious thrill-ride that is Mad Max: Fury Road has quickly set itself aside as a contemporary action cinema classic, and yet for a movie packed with operatic violence and fiery bombast, Max’s latest trip to the wastelands is also a surprisingly progressive and thoughtful race to freedom. The combination of heart-stopping visuals and carefully considered characterisation is much in part to the inventive direction of Max’s creator, George Miller. However, despite lengthy production woes repeatedly stalling the arrival of his vision on the silver screen, those years of frustration and canned creativity also led to the hoarding of a wealth of highly detailed production materials – much of which can now be found plastered across the glossy pages found inside Titan Books’ companion to the blockbuster, The Art of Mad Max: Fury Road.

The Art of Mad Max: Fury Road is a substantial and visually engaging publication overflowing with the same colourful dynamism that has quickened the heartbeats of cinemagoers. The book’s collation of differing styles of concept art – ranging from the cartoonish to the distinctly graphic novel-esque – would go on to directly shape every aspect of Max Rockatansky’s raucous exploits. From character sketches to environmental drafts, these illustrations are pieced together alongside film stills – highlighting the conceptual journey from wild notion to finished celluloid product. The evident tinkering, tailoring, and sometimes stripping down of early ideas – for instance the costume design of characters such as Nicholas Hoult’s Nux – is intriguing, revealing how even the tiniest of details where repeatedly scrutinised and altered despite the larger than life nature of the finished film.

Perhaps the most impressive aspect of the companion is its strict attention to detail in covering a multitude of the movie’s components. From stunt choreography to weapon design, character profiles to vehicle breakdowns, there’s so much to rifle through and ultimately lose oneself in. The sheer amount of content and evidence of planning is both a wonderfully immersive reserve of source materials and a clear indicator of why Fury Road is such an accomplished movie both on its scorched surface and deep down below the layers twisted metal and sand.

While the level of content featured may be undoubtedly deep, Abbie Bernstein’s written commentary also delivers a great deal of context to this collage of savagery. Drawing upon her own analysis and the insights of those directly responsible for this latest incarnation of Mad Max, such as the production crew, screenwriters and Miller himself, her summation of scenes and characters is concise and full of interesting facts. One minor criticism would the hectic layout and formatting of the book throughout. While such presentation mirrors the picture to which it pays tribute, it can also detract from the pure visuals on display, possibly over-facing those sitting down for a long session of reading. The Art of Mad Max: Fury Road is a worthy companion to its big-screen counterpart that doesn’t just add a little extra juice to the tank, but supercharges a movie that’s already firing on all cylinders.