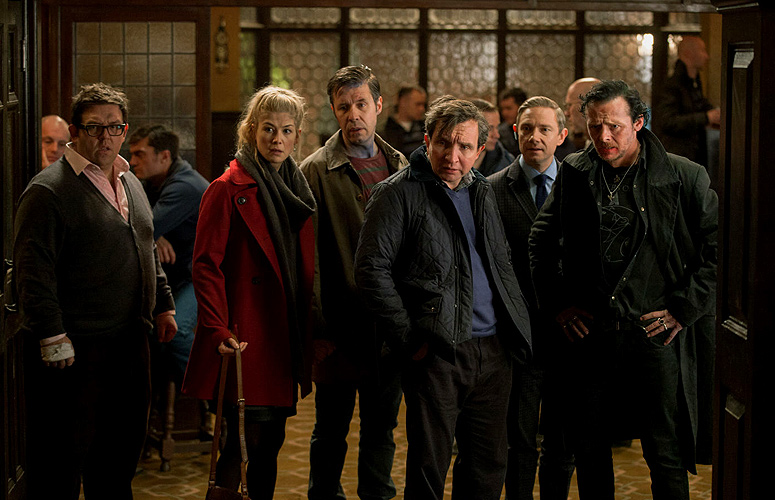 Upon its release I wrote a preview of The World’s End for a cinema magazine. I remember sarcastically replying to the marketing manager who assigned me the piece that I was glad few words had to be written as “I can’t stand Simon Pegg and Nick Frost”. I hadn’t seen the film; I didn’t plan on changing that fact – yet I already knew what the duo had in store for audiences.

This recommendation isn’t an admission of how wrong my premature judgements proved; ultimately my educated guess was largely accurate. Pegg & Frost have been regurgitating the same filmic formula of best mates in varying degrees of deadly yet hilarity inducing peril ever since Shaun of the Dead became a cult favourite on home shores and across the Atlantic. Their outings are hardly a riddle wrapped in an enigma, and The World’s End doesn’t deviate from this now beloved filmmaking style.

After failing to complete “The Golden Mile” – a pub crawl stretching twelve fine English watering holes – years prior, five childhood friends begrudgingly reunite to once again attempt the mammoth task. However, as the old wounds of broken friendships come unstitched and a “pissy” toilet altercation gets, well, even weirder than the fella with the wandering eyes at the urinal next door, the effects of downing gallons of ale cease to be the boys’ main concern.

Pegg, Frost and Director Edgar Wright’s obsession with the cultural significance of sitting in a rundown pub and watching life’s former glories settle at the bottom of pint glass is once again exhibited in all its unflattering mundanity. Not before long, this quintessentially British pastime is turned on its head with the introduction a threat that is poised to not only put the kybosh on the lads’ pub-crawl but claim their pasty mortal forms alongside the rest of the human race.

In the end, what I think I’m trying to say is that I did watch The World’s End and it was a highly entertaining experience, largely due to its authentic emotional tone throughout, wealth of laughs and quintessentially British cast – including a cheeky little covert cameo – and I’m not really sure how I feel about that. If you’re in the mood for a throwaway film experience, that leaves very little for debate yet provides a good deal of comedic nourishment and some joyously choreographed action sequences, then this is the sci-fi comedy for you.

The World’s End is available on Netflix UK now.

2 thoughts on “Netflix Film of the Week: The World’s End”