It might not officially be The 12 Days of Christmas, but FILM IN WORDS will still fill your festive viewing schedule with cheer. From beloved movies that have become an irreplaceable holiday tradition to cult and lesser known Xmas cuts that promise to subvert and haunt your holidays, there’s something for everyone all the way up to Christmas Eve. 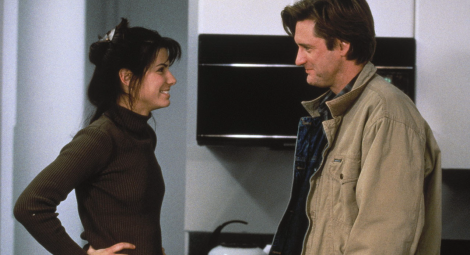 HOW I MET YOUR BROTHER

Previous entries in this series of Christmas viewing options have sought to divide audiences and disrupt popular perceptions of Christmas and all its trappings. Such a filmic modus operandi is a beautiful thing, and the opportunity to embrace the darkness while surrounded by festive light may attract as many individuals as it will alienate. However, the bleakness and negative energy of such compelling yet controversial titles is a heady cocktail. A corrosive tipple which should not be ordered on a nightly basis – much like Baileys – especially during a season in which the jolly reign supreme.

Therefore, one must also partake in some sweetness, light and sentimentality at this time of year – but this doesn’t mean you have to sacrifice filmmaking quality in the process. Released in 1995, While You Were Sleeping is the perfect recipe for film lovers who want solid storytelling, characterisation, and a tale that both warms your heart and brings a tear to your eye. Starring Sandra Bullock alongside a litany of lovable characters, the picture is a sweet and lyrical farce that radiates with melancholy and romance from beginning to end.

Bullock portrays lonely transit worker, Lucy. After the man that she longingly admires on a daily basis is mugged and pushed off the station platform in front of her eyes, Lucy leaps into action, pulling his unconscious body out of the express train’s path and ultimately saving the handsome commuter’s life. After a minor miscommunication in the emergency room, the coma stricken, Peter (Peter “Hey it’s Sandy from The O.C.” Gallagher) – the man who she has previously only traded tokens and a smile with – is mistook for her fiancé by both the nurses and his family. Unable to reveal the truth due to a series of comical twists and turns – alongside her own yearning for company this Christmas – Lucy adopts her new role, while her new family adopt her. That is until Peter’s Brother, Jack (Bill Pullman), arrives home and begins to question Lucy’s legitimacy while growing ever closer his ditsy yet incredibly charming sister-in-law to be.

Christmas time in Chicago is a soulful and energetic backdrop to the film’s tender plot, and ultimately the clearest identifier of why the film is a festive must. The contrasts in characters, the undeniable charm of Bullock and Pullman alongside one another, and the seamless skips from the slapstick to understated tenderness has rarely been matched in the twenty years since the film’s release – especially by the recognisably saccharine and surface romance of opportune festive flicks – and the picture still stands as one of the most robust romantic comedies of the nineties – if not ever. A poignant and deeply lovable tale of mistaken identity and love at first sight, While You Were Sleeping should be passed from generation to generation every Christmas time.