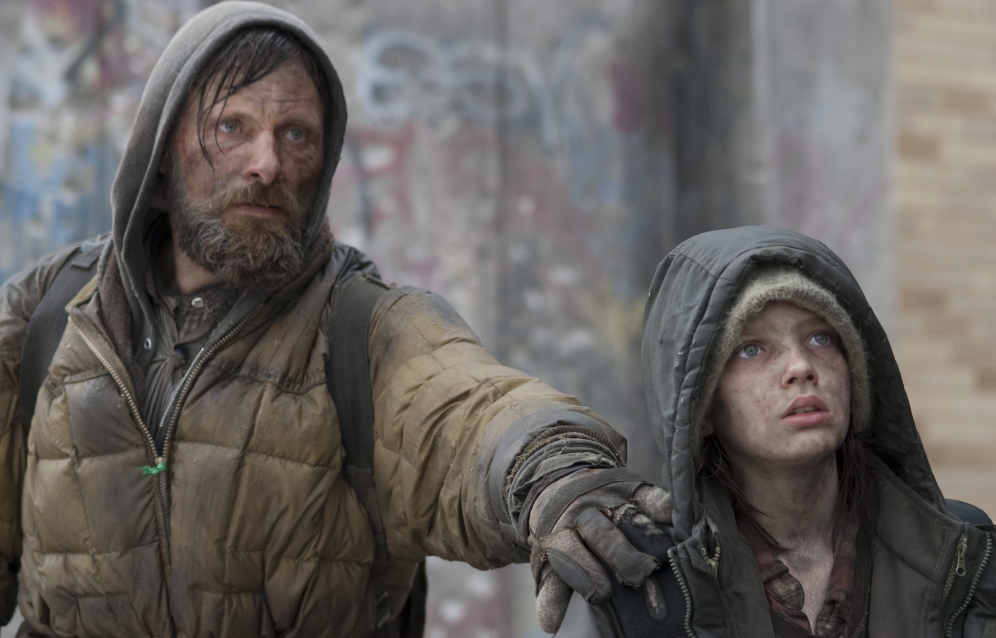 Though not strictly considered an example of the horror genre, The Road offers a litany of terrifying sights upon its journey through a post-apocalyptic American frontier. Those who have read the novels of Cormac McCarthy, or maybe just heard whisperings of the devilishly wicked and unsettling set-pieces contained in works such as Outer Dark and Blood Meridian, will be aware of how more often than not in McCarthy’s world the limits of human depravity are boundless.

The Road’s true horror is distilled from the emotional burden it saddles you with from the outset. To be alone, surrounded by cannibals and bloodthirsty thugs is one matter, but to have to protect a child from those aforementioned perils, and an equally savage environment, is an altogether more disparate and desperate prospect – one which is all too real for Viggo Mortensen’s ‘Man’. Travelling toward the warmer South with the fading hope of discovering a more forgiving landscape upon which to not just survive but live, the unnamed man and boy must traverse one of the most unsettling portrayals of a world gone to environmental ruin committed to film – with only a pistol, rusty shopping cart and one another for company.

Often the horror genre’s get-out clause is that of its twisted surrealism, allowing your sense of big screen escapism and the following comedown into reality to become your saviour when the lights go out; that howling may well be a werewolf but it’s most likely next door’s dog. The Road revokes that glimmer of relief, posing the question “what if?” instead of “just imagine?”. It forces you to relate to its grounded everyday characters more so than any frat-boy or cheerleader, encouraging you to vicariously share the events and emotions on-screen. There’s the familiar blood, and cleavers, and deep dank cellars which pulsate with the unknown but there’s also a sobering dose of realism that wears you down – leaving you longing for that familiar escape route of a Big Bad monster that ceases to exist beyond the eight-hour makeup session and SFX. Director John Hillcoat’s adaptation of the novel restricted the very worst, most visceral imagery McCarthy had to other yet still provides an extremely bleak and unforgiving trip into a fictional vision we all know could very well become reality.