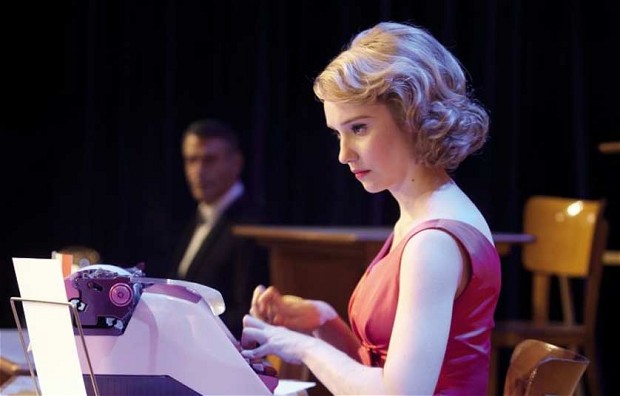 EYE OF THE TYPIST

Starring Belgian actress Déborah François (L’Enfant), alongside Romain Duris (The Beat That My Heart Skipped), Populaire tells the charming and romantic tale of Rose, a young woman from “nowheresville” who under the tutelage of her new boss Louis attempts to become the fastest touch-typist in the world.

After fleeing a life of shop-assistant servitude and a marriage to the local mechanic that her cantankerous father has planned for her, Rose becomes the secretary of sophisticated insurance broker and ex-athlete, Louis. Despite her inability to complete the most basic of secretarial tasks without chaos ensuing, Rose’s true talent lies in her furiously fast fingers and their command of typewriter keys. After witnessing Rose’s gift first-hand, the highly competitive Louis decides to train his beautiful young protégé in the art of professional typing – coaching her to become the champion he never could be. After secretly moving Rose into his house, the pair’s chilly relationship begins to thaw and romantic feelings start to blossom, but with national finals approaching what will win out when love and competition go head-to-head?

Populaire is a fairy-tale for Mad Men lovers. It retains the distinctly sexy and stylish edge that late 1950’s based film and television has captured so successfully over the last few years, whilst softening the edges to mirror the more whimsical tongue-in-cheek tendencies of the actual period’s romantic odd-couple cinema such as The Seven Year Itch (1955) and Pillow Talk (1959). Stylistically, the film is a joy to watch and listen to; from the animated title sequence to the closing credits, it perfectly encapsulates a colourful and flamboyant post-war France through its sumptuous costume design, nostalgic score and imaginative cinematography. Populaire’s beguiling mix of playful comedic charm, old-fashioned romance, and sensual French allure combined with a highly endearing performance from Déborah François further proves that the 1950’s weren’t just a mad man’s world.

Populaire is available on DVD & Blu-ray now courtesy of Entertainment One. Order your copy here.