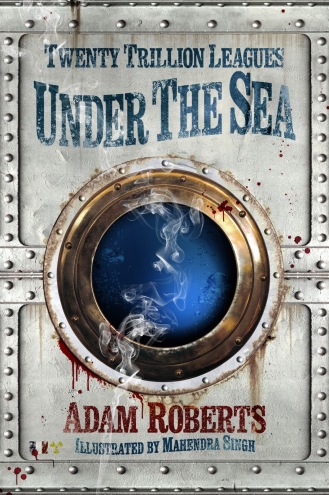 Whether it is one of the many film adaptations, a comic book ink interpretation, musical extravaganza, Disneyland ride, or literary re-interpretation, Jules Verne’s celebrated sci-fi classic, Twenty Thousand Leagues Under the Sea, is one of the most enduring tales of mankind’s unwavering spirit to survive upon and explore the furthermost reaches of the planet we inhabit. Originally published in 1870, the French author’s tale of a U.S. government sponsored crew’s attempts to hunt down a giant mythic sea-creature has inspired many a storyteller with its sheer epic scale. Now, prolific contemporary fantasy author Adam Roberts and talented illustrator Mahendra Singh are the latest two individuals to keep Verne’s story alive and kicking – even at the very bottom of the blackest, deepest, and most dangerous of oceans.

Twenty Trillion Leagues Under the Sea is both a loyal and highly original adaptation of Verne’s epic voyage. The robust writing clearly exhibits that the many awards attributed to Roberts’ name are deserved. He wryly riffs upon Verne’s original prose, before slipping into his own accomplished contemporary style packed with humour, adventure, and menace – providing the best of both underwater worlds. Though many plot elements have been updated for the story’s 1958 setting, it’s Roberts’ handling of its characters which will likely attract the most attention. Familiar personalities are not only dragged into a new century of technological wonderment and its accompanying evils, but are given a new lease of life in the process – his handling, or rather repackaging of Capt. Nemo proving especially captivating.

Investing in the hardback edition of the book is undoubtedly a wise choice. Singh’s black & white  illustrations are truly allowed to shine upon the oversized pages, whilst the tome like style and ominous sleeve are capable of immediately removing you from the most cosy of surroundings and into one of a far more ominous nature – both setting and greatly contributing to the mood of the story. Though if digital is your preference, you will still be hard-pushed not to slip deeper and deeper into the unforgiving environment the pair have stylishly crafted for the reader.

Fans of Verne’s fiction and the bombastic brand of sci-fi which coursed through the pages of similar authors such as Lovecraft and Poe will undoubtedly find much to enjoy between Twenty Trillion‘s covers. Those looking for an introduction that is more accessible than the original, yet does not tarnish its memory, now also have the perfect opportunity to set upon their own fictional journey into the abyss – experiencing the true depths of Verne and Roberts for themselves.

Twenty Trillion Leagues Under the Sea is out now in both Hardback and eBook format courtesy of Gollancz. Purchase your copy here.