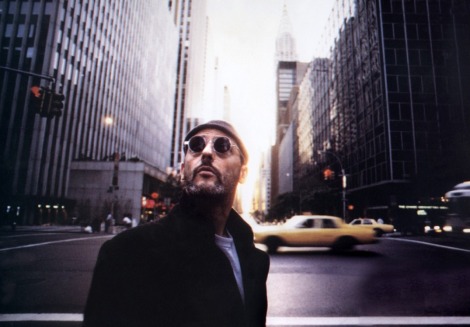 Starring Jean Reno and Natalie Portman in her film debut, Léon tells the tale of the titular Hitman and his unlikely personal and professional relationship with eleven-year-old Mathilda. After Mathilda’s dysfunctional drug-running family are murdered by corrupt DEA agent Norman Stansfield (Gary Oldman), the orphan finds refuge in her mysterious neighbour. Upon discovering Léon’s career in ‘cleaning’ revolves around disposing of individuals rather than garbage, Mathilda convinces her new guardian to teach her the tricks of the trade – while she teaches him that there is a life beyond the confines of the heartless and violent world he inhabits.

The manner in which Besson transposes an amalgamation of beautiful European cities – though Paris’ ornate architecture and quaint cafés clearly prove a root influence –  onto the dirt and grime of an early nineties New York City still remains beguiling. Teamed with a beautiful, mostly Asian inspired score (complete with Bjork’s ‘Venus As A Boy’) – reinforcing Besson’s solitary Ronin-esque portrayal of his assassin – Léon is a picture which repeatedly jumps from introspective, deeply romanticised cinema, to Hollywood blockbuster action – yet the strong and endearing characterisation (including, and sometimes especially, the bad guys) remains a constant. Besson’s flair for aesthetics is evident throughout. His borrowing of European, Asian, and North-American visual conventions ensures that clear divides between ‘safe’ and ‘perilous’ space is evident. Léon’s apartment is initially framed in a distinctly European manner; meandering, locked off shots, each one a portrait of sun-blushed tranquillity depicting Léon going about his mundane everyday routine. Juxtaposing with this are the chaotic spaces inhabited by Mathilda and Stansfield; the camera erratically jumps back and forth; Eastern strings build to a crescendo before falling out of tune and collapsing upon themselves; sound and visuals transition into a state of discord rather than harmony.

Beyond the enhanced sound and picture, which ultimately are reason alone to discover, or revisit Léon, Gary Oldman’s maniacal, pill-popping Norman Stansfield remains one of the finest cinematic villains to ever leave a bloody swathe of violence across the screen – Oldman’s role could have easily provided a wealth of crazed influence for the Joker he would later oppose in Nolan’s Dark Knight Trilogy as Commissioner Gordon. The performance is comfortably the most unmissable and entrancing element of Léon.

Unfortunately the bonus features for this 20th anniversary edition feel rather sparse – hinting at an opportune re-release rather than one which truly celebrates Besson’s work. The absence of the director’s input and commentary upon the film is a noticeable shortcoming and missed opportunity. Fortunately the director’s cut (expanding upon Mathilda and Léon’s professional relationship) and interviews with talented composer and long-time Besson collaborator, Eric Serra, and leading man Jean Reno, provide a decent amount of exposition and background material to enjoy. Whether this release is adequate for such accomplished source material may be up for debate, but Léon is a film which for twenty years has demanded audiences’ attention, and one which “Everyone!” should experience at least once.