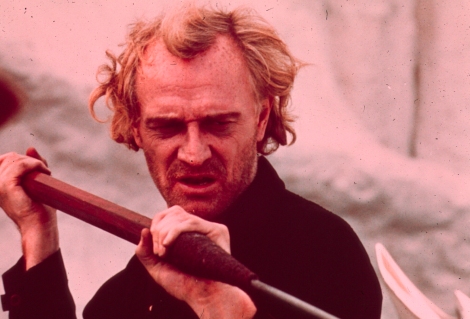 For those who caught the revelatory documentary, Blackfish, and its disturbing ousting of SeaWorld’s barbaric practices in regards to their treatment of Killer Whales, you will be fully aware that the enormous marine mammals are not to be trifled with – the word ‘killer’ should really act as a small indicator of the highly intelligent creatures’ unpredictable nature.

Following his failed attempt to catch the titular Orca, in the process killing the whale’s mate and unborn whale baby, Captain Nolan draws the giant beings’ vengeful attention, leading to much destruction and loss as man battles the wild.

Despite providing a narrative voice of reason, Rampling’s eye-candy doctor feels superfluous as she sways from defiant expert to swooning damsel in distress; her relationship with the Captain, who’s every action defies her every belief, is confused and awkwardly romanticised purely to serve up a sexy sub-plot once the fish guts have been swept off deck. Their interactions mirror that of anti-deforestation protestor commenting upon how the lumberjack looks pretty hot when he swings his axe. Unfortunately, many examples of this lackadaisical characterisation are present throughout.

Positives are present; the manner in which the local fishing village react to the Captain and his crew’s wrongdoing provides an engaging and tense side-story that could have been elaborated upon to great effect. The air of disdain and uneasiness which surrounds the shipmates feels highly authentic and is buoyed by its realistic sense of seafaring superstition. Unfortunately, a complete lack of special features, such as ones which would perhaps focus upon the inspiration behind the gloomy folklore proliferated by the local fishing community, also hinders this release – which is ultimately resurfacing on the basis of its cult status. Those expecting hidden contextual treasure or critical reevaluation should look elsewhere.

If you always wondered what Death Wish would be like if you replaced the brooding Charles Bronson with a deranged whale, then Orca will undoubtedly set your pulse racing. The picture is by no means terrible; the acting is strong and the visuals drag you into the uneasy maritime environment. However, the script is heavy-handed and the action sequences overly recycled – especially when held up against 1975’s Jaws. Ardent fans of the natural horror genre will most likely cite Orca as one of its more accomplished and grandiose examples – and fans of Harris and Rampling will not be disappointed by their bombastic performances – but such positives may prove a drop in a somewhat unremarkable ocean for viewers who expect Moby-Dick and end up paddling in the shallows. 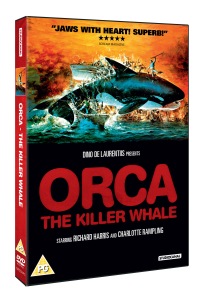 Orca – The Killer Whale is available on DVD from April 14th. Pre-Order your copy here.