As with many of Jean-Claude Brisseau’s pictures, The Brutal Game (Un Jeu Brutal) is a challenging and risqué affair, concerning itself with disability, sexuality, and murder.

After suddenly abandoning a high-profile cancer research project, revered scientist, Professor Tessier, returns to his countryside home to oversee his daughter Isabelle’s care. Paralysed from the waist down and deeply disturbed, Isabelle’s complete lack of empathy and fondness for torturing small animals compels the professor to oppressively rule over his daughter. He implements a rigid teaching schedule, imprisoning and threatening her with violence if she misbehaves or refuses to comply.

Immediately we also learn that Tessier is responsible for a swathe of bloody child murders, as he embarks back into the city equipped with an overnight bag and hunting knife. The reasoning behind the professor’s sadism and cruelty is initially unknown, but his new parental regimen seemingly benefits Isabelle greatly; the introduction of new characters into her life, including the handsome Pascal, opens her eyes to her own sexuality and her heart to nature’s beauty – while her father continues to hunt his youthful prey miles away.

Despite the depiction of some beautiful vistas, and the deeply atmospheric undercurrent which flows through the film’s faint narrative, the execution of scenes depicting Tessier’s murders and Isabelle’s violent tantrums are poorly executed. The picture’s intentions to defy typical serial killer clichés and tropes, both tonally and visually, are highly creative and well-intentioned, but their execution is underwhelming and damaging to the viewer’s sense of immersion. The 35mm film upon which the film was shot in 1983 also results in a somewhat hazy and unattractive overall presentation that strays towards visual ugliness as opposed to charm. 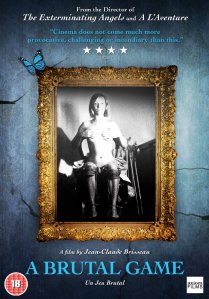 A Brutal Game is available on DVD now courtesy of Axiom Films. Order your copy here.

2 thoughts on “A Brutal Game Review: Lessons in Cruelty”