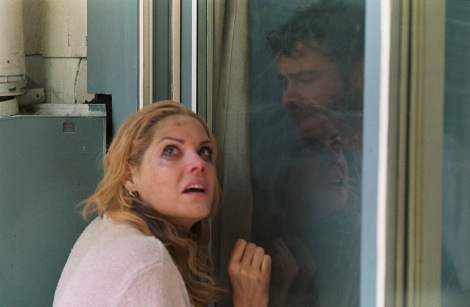 LET THE RIGHT ONE IN

Pitting husband against wife, and exploring the conflict between safety and sacrifice, Chris Gorak’s simplistic yet intense thriller, Right at Your Door, is a forgotten gem of the mid 2000’s.

After a series of dirty bombs are detonated during rush hour in downtown Los Angeles, out-of-work musician Brad, Rory Cochrane (Argo), takes desperate DIY measures to seal his home from the looming secondary threat of a fast approaching toxic ash cloud. Brad’s true struggle and turmoil arrive upon being faced with sacrificing his own safety when his wife Lexi, Mary McCormack (K-Pax), who is initially thought to be caught in the incident, turns up at the house – threatening to contaminate their newly airtight property.

What this film does extremely well is tap into a tangible feeling of threat and anxiety in a post 9/11 and 7/7 world; serving up realistic characters dealing honestly with difficult decisions towards self-necessity. Furthermore Gorak captures equally strong themes of home invasion, paranoia, and the corrosive mistrust in government peripherals – no doubt a response to the US government’s lacklustre response in the wake of hurricane Katrina. Yet the fundamental flaw in the film is how it fails to fully grasp the main cinematic trope it sets out exploit. Brad’s guise of safety would be far more potent if the audience were not taken out of the house, undermining the crux of isolation that comes with films set in a single environment. The best attribute of texts such as Twelve Angry Men, Rear Window, and even The Breakfast Club, is that they remain in that setting for the longevity of the film, filling it with conflict and suspense, and in the process allowing for a tangible portrait of real life and emancipation

Treat yourself to a somewhat depressing and angst filled afternoon and double bill Right at your Door with Lucy Walker’s brilliant anxiety fuelled monster of a documentary Countdown to Zero. A bit of advice would be to steer clear of building a lead-lined bunker and just dip your toe in the comedy category, maybe seek out Ferris Bueller’s Day Off or Airplane! for some post disaster relief.

Right at Your Door is available now on Amazon Instant.