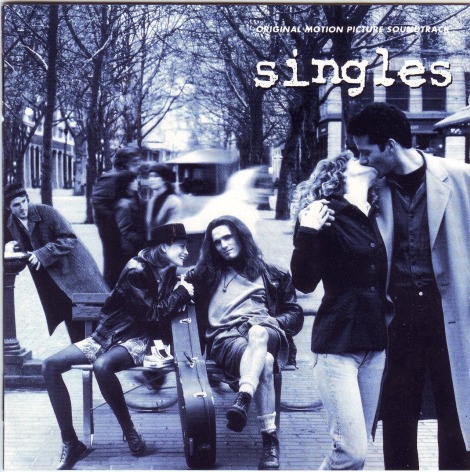 A stellar soundtrack can save even the worst film from descending into an irredeemable abyss of complete critical, commercial, and artistic failure. Grandiose orchestral movements and popular music cuts can elevate filmmaking to new sonic heights – leaving just as big an impression on an audience’s ears as the pictures onscreen leave upon their eyeballs. Whether an official soundtrack is redeeming cinematic wrongdoings or accompanying big screen greatness, Settling the Score sets out to showcase television and film’s finest musical mixes.

Released in 1992, Singles’ narrative concerns itself with six twenty-somethings sharing an apartment block in the midst of Seattle’s burgeoning grunge movement. The film’s focus upon the romantic struggles of two Generation X couples amidst the surrounding cultural zeitgeist of grunge, further cemented director Cameron Crowe’s credentials as pop culture’s most important record keeper in the wake of 1989’s boombox hoisting Say Anything. Brandishing miles of flannel, coffee shop culture, and numerous musician cameos from icons such as Eddie Vedder and Chris Cornell, Singles‘ naturalistic depiction of Washington trademarks and one of contemporary culture’s most exciting and memorable artistic periods, earned the love of critics and moviegoers alike, but its soundtrack is perhaps its most enduring accolade – here are just a few of its highlights.

ALICE IN CHAINS – WOULD

Written by guitarist and co-vocalist Jerry Cantrell, Would?‘s raw, rugged lyricism relates to the death of Mother Love Bone lead-singer, Andrew Wood, from a heroin overdose in 1990 – drug related ailments would later play a major role in the death of Alice in Chains’ own frontman, Layne Staley. First released to coincide with Singles, Would? later became one of the band’s most beloved singles, and the final track of Alice in Chains’ seminal album, Dirt; a somber and spiritual celebration of the darker, if not darkest, depths of grunge.

The second Pearl Jam track to appear on the soundtrack, State of Love and Trust was originally recorded during the sessions for Pearl Jam’s debut multi-platinum (thirteen times to be specific) monster of an album, Ten. Including typically intricate yet animalistic guitar parts, driving drums, and an impassioned, visceral vocal performance from Eddie Vedder, long-time Pearl Jam friend and collaborator Cameron Crowe would later state the track was about “battling with your instincts in love”.

Further Listening: The Replacements – Pleased To Meet Me

SCREAMING TREES – I NEARLY LOST YOU

Today, Mark Lanegan is perhaps best known for his collaborations with contemporary desert rockers, Queens of the Stone Age, in 1992 he was the lead singer of the Washington-based, Screaming Trees. Alongside enjoying modern rock radio success, the track also appeared on the band’s breakthrough album, Sweet Oblivion. The marriage of Lanegan’s hushed, raspy vocals and the band’s complex, eastern influenced musicianship would highlight I Nearly Lost You as one of Singles‘ most recognisable cuts.