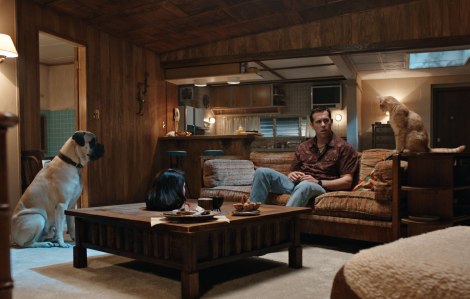 Ryan Reynolds’ playful yet resilient campaign to bring a truer representation of comic book mercenary, Deadpool, to movie theatres following the hatchet job Wolverine Origins inflicted upon the character, exhibited not just his love for filmmaking and unique characterisation, but affection for bizarre and outlandish black humour. Fans of the charming leading man will be well aware of his range in adopting contrasting personas and aptitude for hopping between genres with relative ease – whether it’s within an action thriller (Safe House) or indie romance (Adventureland). However, when Reynolds does get it wrong, which unfortunately is more often than not, he gets it very wrong.

Keyboard tapping cries of “sack the agent!” can often be found in the comments section of a Reynolds fronted release, but clearly the actor himself plays a major part in seeking out cinema’s more belligerent and divisive films. Whether such choices can be attributed to a yearning for legitimacy, a need to challenge oneself, or perhaps a combination of the two, Reynolds’ willingness to parlay his devastating good looks and bottomless pit of innate charisma to portray unlikeable individuals lingering on the outskirts of society should be admired.

One such ostracised individual is Jerry, a cat and dog whispering psychopath in the vein of Norman Bates. After overcoming a murky past, that is alluded to but not explicitly explained within meetings between Jerry and his psychiatrist (Animal Kingdom’s Jacki Weaver), the meek yet clearly disturbed Jerry has found a job in a factory producing bathtubs and even fallen for a beautiful English colleague named Fiona (Gemma Arterton). However, when Fiona rebukes Jerry’s lovesick advances, his newfound tranquillity takes a murderous nosedive into violent mental illness.

The hard black outlines of industrial vistas, isolated forest clearings illuminated by the ambient glow of headlights, and dingy wood-panelled interiors act as the stage for much of The Voices’ peculiar happenings. Those familiar with the photography of Gregory Crewdson will recall this haunting style of Americana steeped visuals which director Marjane Satrapi has installed onscreen. The beautifully composed establishing shots not only situate the action, but enforce the otherworldly aura that falls upon the typical American small town of Milton by night.

The Voices can be split into two distinct halves: the psychotic hallucinogenic trip Jerry takes through life when he’s off his meds, and the ghoulish, death-filled reality from which Jerry’s compulsion filled mind flees – despite being its cause. Both sides of the deranged coin are distinct and purposeful, together crafting a unique image of madness reinforced by Reynolds’ creepy performance; an act that impressively extends to voicing Jerry’s talking pets (another symptom of the killer’s unhinged psyche).

Reynolds’ gambles may not always pay off, but when he chooses to swim against the tide of Hollywood, his work is often at its most intricate and compelling. You may well watch the first ten minutes of The Voices and hate it, but ultimately repulsion is a far greater reward than indifference. Stick around and you’ll uncover a picture that with a single heavily medicated dose, swerves from pitch black horror comedy to unsettling biography of a psycho killer.