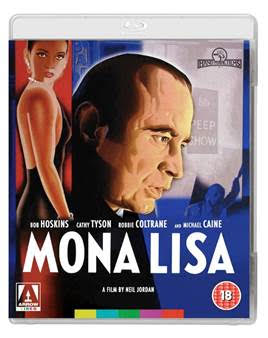 Following a seven-year stint spent at Her Majesty’s Pleasure, George returns to his London home with hope of being reunited with estranged teenage daughter, Jeannie. What he discovers is a changed city, filled with new, racially diverse faces, and stricken by an increasingly seedy underbelly engorged on prostitution and pornography – in George’s eyes both are unwelcome.

George is quickly recruited by his ex-employer, Mortwell (Michael Caine), a sleazy pimp who caters to the needs of a high-end clientage possessing increasingly sordid desires – the most abhorrent of which being a penchant for underage girls. Driving the strikingly tall, beautiful and black, Simone (Cathy Tyson), from client to client, George slowly begins to fall for his red light passenger, gaining a deeper insight into the kinks of her nightly routine while descending into a vast den of capital city iniquity.

Mona Lisa’s major strength lies in its performances, spanning from a substantial supporting cast, to Bob Hoskins’ leading role which earned him an Oscar nomination and BAFTA Leading Actor win. Five years on from his blusterous breakout portrayal of an unpredictable cockney crime lord within John Mackenzie’s The Long Good Friday, Hoskins’ portrayal of George is a much more balanced turn that juggles comic lightness and sneering shade of character while remaining wonderfully believable and naturalistic. Hoskins’ unassuming, mildly racist, and physically tough ex-prisoner is a character rife with contradictions. His sometimes childlike, and often uneducated, ignorance evolves from comical wonderment into bewildered fury as he witnesses the disturbing exploitation and objectification of the city’s sex workers. Arrow’s recent restoration and pairing of both pictures exhibits just how captivating Hoskins was, and still is onscreen, proving that while he may have been diminutive in stature his capacity to perform towered high above many of his contemporaries.

Not only does George exhibit contrasting personalities, but so does the film’s compelling narrative, morphing from a granular character study of two highly contrasting characters to a sprawling and increasingly tense hunt for a modicum of personal salvation. Unfortunately, and despite still exhibiting a good degree of authentic English charm, Mona Lisa isn’t as visually timeless as The Long Good Friday. Both pictures possess a distinctly eighties aesthetic that mixes and matches soft pastel shades with gaudy gold finery, but ultimately there’s a big difference between a picture which appears retro and one which simply looks dated – sadly, Mona Lisa often falls into the latter category. Nevertheless, the city at night, with its labyrinth of neon back alleys and twinkling tower blocks, is an evocative and immersive backdrop decorated with engaging characters of all different shapes, sizes and degrees of menace.

A largely overlooked British classic from Director Neil Jordan, Mona Lisa isn’t Hoskins’ greatest film, yet it is arguably his finest performance and one well worth rediscovering thirty years on from the film’s original release via these expertly restored Arrow Video re-releases.