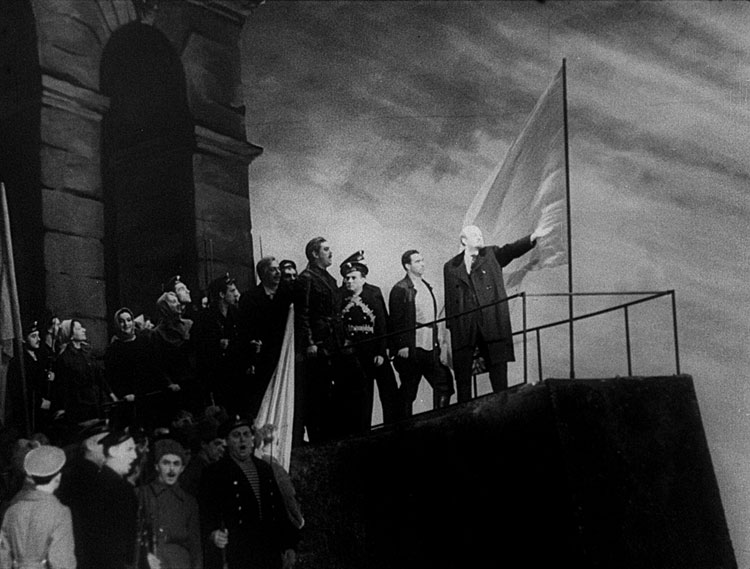 Pieced together solely from footage sourced from the Soviet film archives, Sergei Loznitsa’s collection of documentaries, Blockade, Revue, and Landscape, provides a largely unseen portrait of Russia’s tumultuous and often deeply tragic journey through the 20th Century. Retrospectively the key events which have marked the vast countries torrid awakenings, such as the incomprehensible loss of human life throughout The Second World War (the figure approximately stands at twenty-seven million military and civilian casualties) have been depicted in various manners, including Hollywood cinema via films such as Enemy at The Gates. Ultimately the factual leeway offered to filmmakers and storytellers in the name of artistic license has muddied the historical waters, leading to confused and contradictory representations of the period. Despite Loznitsa’s pictures also being edited through contemporary eyes (the three documentaries were originally released between 2003 and 2008) they offer a much truer and poignant reflection on the Soviet Union’s struggle.

Beginning with Blockade, the Belarusian filmmaker highlights the longest and most devastating siege of WW2 as Hitler attempted to starve the population of Leningrad into submission. From the initial depiction of military measures; the installation of anti-aircraft guns; observation balloons taking flight; and the marching of German prisoners of war through the hostile city streets, the daily upheaval facing the city is evident. Alongside the bombed out buildings and ice slicked streets the increasingly horrific reality of wartime Leningrad becomes extremely difficult to watch. A particularly haunting passage depicts cloth wrapped bodies being dragged to mass graves upon sleds by bereaved relatives; mothers, fathers, children, and friends all face increasing hardship as winter grows ever more inhospitable.

Through the use of various propaganda productions Revue depicts a 1950’s and 60’s Soviet Union striving to expand its borders both beyond city walls into the wild virgin territories of its own state and increase its status upon the world’s stage by embarking upon ‘interplanetary’ space travel. It is often frightening just how potent such propaganda could prove, as theatrical productions, state approved films and various other mediated sources essentially manipulated individuals’ lack of compliance to appear as clear signifier of weakness both emotionally and physically. What proves even more unnerving is the distinct targeting of the Russian youth by the visual diatribes. The foundry sequences showcasing rival steel mills competing with one another also prove captivating. The reminder of yesteryear’s intensive industry highlights one of Russia’s true strengths via often astounding imagery of coal stained faces pouring ferociously hot molten steel.

Finally, Landscape, the first of the three documentaries to utilise colour footage, depicts the far more everyday scenario of a group of individuals simply waiting at a bus stop and discussing daily life. A beautiful summertime Russia takes centre stage through panoramic cinematography before once again slipping into the grey grasp of winter; weathered concrete apartment blocks growing ever more indecipherable against the muddied sludge of the roads and snow filled sky. The title is by far the most aesthetically driven and contemporary of the three documentaries; shifting tone through its clear emphasis upon social realism as opposed to the pervasive Stalin approved socialist realism identified in Revue.

Even with its rich history, very little Soviet Cinema has garnered mainstream recognition beyond Eisenstein’s Battleship Potemkin, and Dziga Vertov’s pivotal experimental documentary, The Man with the Movie Camera. Decades following their actual occurrence, Loznitsa’s careful collages of imagery, emotion, and hindsight are invaluable and often deeply moving tools when it comes to understanding The Soviet Union’s chequered past. One day the three pictures may well prove just as important as those aforementioned classics in revealing and teaching future generations what life was really like behind the iron curtain.