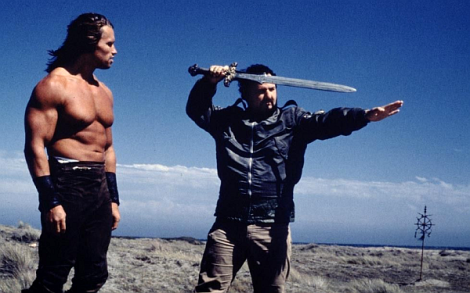 Teddy Bear with an AK-47

John Milius’ bear-like shoulders have bore many titles throughout his infamous career in cinema as both a writer and director; visionary, fascist, zen anarchist, threat to western civilization, but most importantly a true filmmaking great. Milius was born and raised in the American Midwestern town of St. Louis, Missouri. The sun would shine in the summer and snow would fall in the winter, his upbringing that of a typical middle-class American. At age seven Milius’ family moved to California, setting in motion a life and career which would irreversibly change the face of contemporary cinema forever.

Unable to enlist in the U.S. Army and fight in the Vietnam War due to his asthma, Milius signed up for an entirely different way of life, that of a filmmaker. Considered, at the time of his college years, the brightest star amongst his film school peers including George Lucas, Steven Spielberg, and Francis Ford Coppola, Milius’ unashamed bravado and undeniable storytelling talent fast-tracked the young artist to the pinnacle of the Hollywoodland mountain. A lover of guns, surfing, and old-fashioned masculinity, his brash and bold style cemented films such as Dirty Harry, Apocalypse Now, and Conan the Barbarian as milestones of popular culture. Such robust characters as Eastwood’s Harry, Schwarzenegger’s Conan and Robert Duvall’s napalm sniffing Colonel Kilgore undeniably refractions of the director’s own grandiose character mirrored onscreen.

Recounted via the anecdotal tales of his children, acquaintances and industry superstars such as Harrison Ford, Arnold Schwarzenegger and his aforementioned group of closest filmmaking friends, Lucas, Spielberg, and Coppola, ‘Milius’ is a fitting tribute to the man whose filmic influence proved irreplaceable. Lovingly arranged, yet still entirely honest when regarding the egotistical brashness and right-wing politics which plagued the director’s genius and ultimately led to the partial downfall of his career, Milius is a riveting and enlightening documentary that is a must for cinema lovers. Following the director through his ‘black sheep’ teenage years to his recent battle with a debilitating stroke, directors Joey Figueroa and Zak Knutson have pieced together a highly polished, thoroughly researched and entirely inspirational documentary film that delves into the life of an equally inspirational man – employing some serious star power along the way. “Charlie don’t surf” but Johnny sure as hell does.

Milius is available on DVD from November 18th courtesy of Studiocanal pre-order your copy here. Do you love the smell of Napalm in the morning?