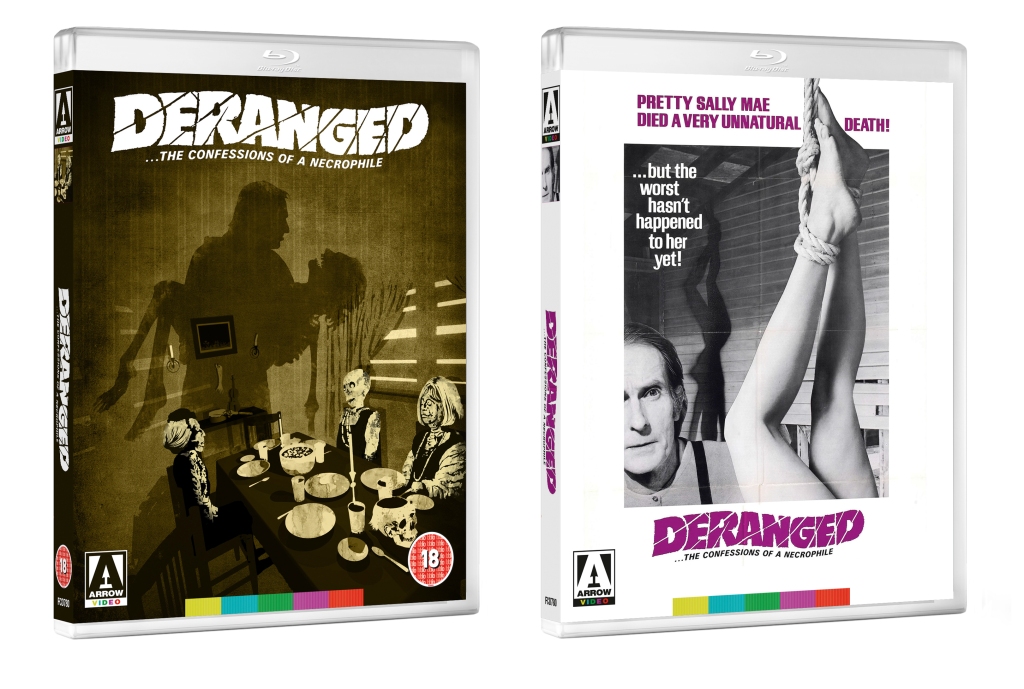 With a simple black opening title card that reads “The motion picture you are about to see is absolutely true. Only the names and locations have been changed.” Combined with the title ‘Deranged: Confessions of a Necrophile’ it stands to reason that the following film will most likely prove an unsettling experience.

Based upon the life-story of serial killer and grave robber Ed Gein – the infamous murderer immortalised by the American Psycho scene in which Patrick Bateman and his misogynist yuppie buddies philosophise about the ‘merits’ of the fairer race – Deranged is nightmarish journey into a distinctly creepy and unsettling rural American Midwest.

Gein’s horrific story and the perverted modus operandi of his crimes have proved fertile ground for many of the horror genre’s greatest storytellers. Psycho, The Texas Chainsaw Massacre, The Silence of the Lambs and most recently TV’s American Horror Story have all snatched up aspects of Gein’s disturbed mythology in establishing their lead protagonists as some of the most terrifying and twisted men to walk the earth, including Ezra Cobb.

Stranded upon the family farm for most of his youth and indoctrinated from an early age that all women minus his insidious mother were “works of the devil” and “filthy black-souled sluts”, Ezra, later known as ‘The Butcher of Woodside’, loses what semblance of sanity he still possessed following his mother’s death – retreating deeper into a downward spiral of mental necrosis. Incapable of accepting his mother’s death and secluded amidst the harsh winter landscape, he decides that mother should come back home and the two should once again be together. After first turning his attention to the dead, Ezra’s desires are piqued by the living, namely young and attractive females that could keep him and his mother company on the farm – setting Ezra upon a deadly and darkly comic hunt for new ‘friends’.

The overall aesthetic of Deranged may look dated today, after all the film was initially released in 1974, but it possesses a shock factor charm that fans of exploitation blood and guts horror in the vein of Tarantino and Rodriguez will appreciate – Planet Terror terror on a farmyard. The faux documentary exposition frames the narrative succinctly ensuring the content doesn’t drag, and the camera work, such as extended one shots display a technical ambition from directors Jeff Gillen and Alan Ormsby that lesser horror entries of the period were willing to overlook in favour of peppering viewers with double-barrelled gore. The Blu-ray restoration is also of a high visual quality – as is to be expected with Arrow Video’s re-releases – displaying all of Ezra’s stomach-churning activities in their full uncut glory.

With an introduction from the film’s makeup artist, Tom Savini, most recognisable to many for his role as ‘Sex Machine’ in Robert Rodriguez’ 1996 cult action-horror flick, From Dusk Till Dawn, and packed with special reissue features including featurettes and interviews, Deranged is a worthy addition to any horror fans collection – just make sure you watch it with an empty stomach.

Deranged is available on DVD and Blu-ray from Monday August 19th courtesy of Arrow Video pre-order your copy here.