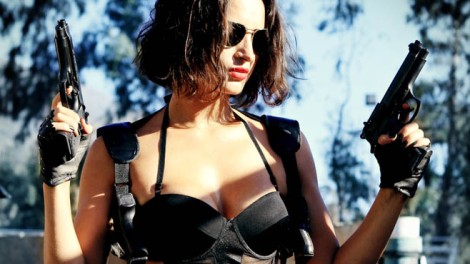 Quentin Tarantino and Robert Rodriguez carved careers out of their bloody homages to late 60’s and early 70’s cinema, as films such as Reservoir Dogs (1992) and From Dawn Till Dusk (1996), successfully balanced elements of contemporary horror and action cinema with subversive narratives and good ol’ blood splattered violence. Gradually the balancing act performed by directors has waned, and today’s exploitation flicks closely mirror the depraved and often absurd original examples of the sub-genre’s earliest incarnations. Even Tarantino and Rodriguez threw caution to the wind with 2007’s Grindhouse: a collection of pictures and their accompanying ‘fake trailer segments’ which opened the door for perhaps the most recognisable character of modern tongue-in-cheek shock cinema, Danny Trejo’s Machete.

These parodies of parodies have somehow managed to not only increase in volume of release, but gratuity and shocking content – a fact anyone who has viewed Jason Eisener’s Hobo with a Shotgun (2011) can attest to. The problem with such pictures is that it is often difficult to recognise where the storytelling begins and the ultra-violence ends – such eye gouging, intestine stripping content has become rather overused, and ultimately increasingly boresome in the process. Thankfully, Ernesto Díaz Espinoza’s Bring me The Head of Machine Gun Woman has chosen not to completely relinquish a sensical narrative and sense of style in favour of a series of shlocky set pieces – providing elements of both vast exploitation worlds.

The main issue of this multiple assassin battle royal is that beyond its female protagonist it doesn’t provide its own signature of originality. Aesthetic wise, it borrows all the familiar exploitation tropes; freeze-frame character introductions; a faux film grain; and a genre bending soundtrack loaded with 80’s synth and Spanish guitar. These elements may well be implemented to a high technical standard but you quickly tire of their presence. Furthermore the utilisation of Grand Theft Auto-esque shots and title cards to mark story progress immediately date the picture, as it mimics a series which itself has proven to be far more sophisticated of late in terms of characterisation and storytelling. Despite her hokey outfit Machine Gun Woman is at its best when said tooled up female is onscreen. Fernanda Urrejola successfully fills the leather knee-highs of Espinoza’s unique femme fatale with a strong performance which rescues the picture. Despite its many shortcomings Bring me The Head of Machine Gun Woman is a welcome return to a more thoughtful form of exploitation. If next time Espinoza can bring more of his own ideas to the table he may still prove a serious contender.

Bring Me the Head of Machine Gun Woman is available on DVD & Blu-ray now courtesy of Clear Vision. Order your copy here